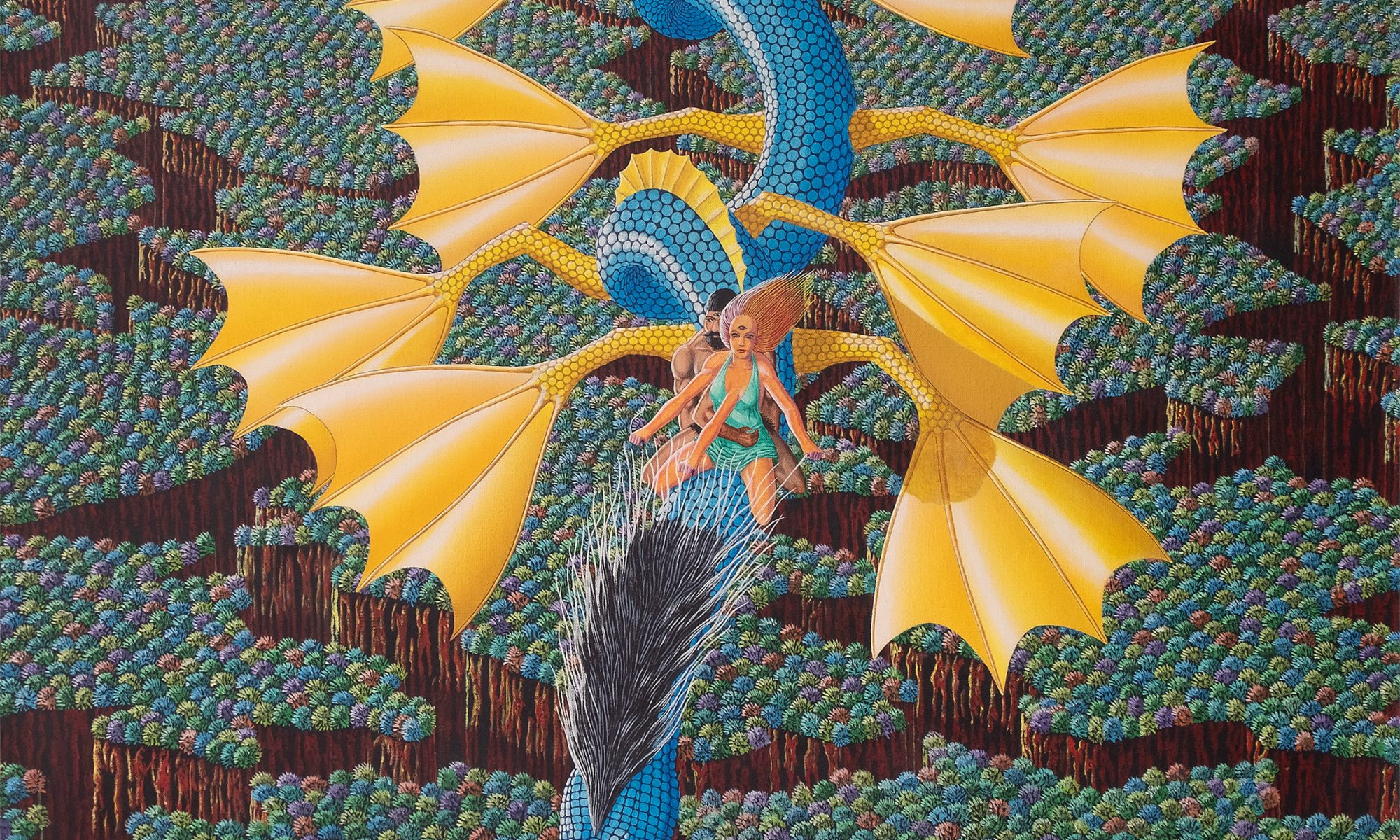 We are really excited for our event to celebrate the centenary of David Lindsay’s A Voyage to Arcturus later on this week. In anticipation of a rich discussion on this extraordinary Scottish SFF novel, we have put together a gallery of illustrations by various artists! Enjoy!

First of all, here are the two images most readers will know: the iconic cover of the Ballantine edition of A Voyage to Arcturus (third printing, 1973) and Dorothea Breby’s bespoke illustration for Radio Times, published on 22 June 1956, two days before the radio serialization of the novel begun.

By kind permission, we are delighted to share this spectacular illustration of Maskull and Oceaxe riding the shrowk, a favourite scene for illustrators (the Ballantine 1973 cover depicts the same scene), by Joel Fletcher:

Fletcher has really captured very well Lindsay’s vivid description of colour. The shrowks are described in this way:

They were not birds, but creatures with long, snakelike bodies, and ten reptilian legs apiece, terminating in fins which acted as wings. The bodies were of bright blue, the legs and fins were yellow. They were flying, without haste, but in a somewhat ominous fashion, straight toward them. [Maskull] could make out a long, thin spike projecting from each of the heads.

Artist Nicolas Geffroy has completed a number of illustrations for A Voyage to Arcturus (you can find the entire series here) and we are delighted to share two of them:

Starkness Observatory, somewhere “on the north-east coast of Scotland” (Chapter 2: In the Street), from where Maskull, Nightspore, and Krag set off for Arcturus:

Last but certainly not least, this illustration pictures the startled Maskull as he awakes on Tormance and finds out that he has grown “fleshy protuberances” on his forehead and neck, and, perhaps more memorably, a “breve”, a tentacle which has budded “from the region of his heart” which is described “as long as his arm, but thin, like whipcord, and soft and flexible” . Later on Joiwind tells him that “by means of it we read one another’s thoughts” (Chapter 6: Joiwind). This illustration is by Monica Burns, a comic artist from Scotland, and was first published in issue 3 of Scottish SF magazine Shoreline of Infinity:

Join us on 19th November to celebrate the 100th anniversary if this influential book! For details about our guests and to book a (free) ticket, see here: https://fantasy.glasgow.ac.uk/index.php/2020/10/15/celebrating-the-centenary-of-a-voyage-to-arcturus/

And here is our “trailer” for the event!