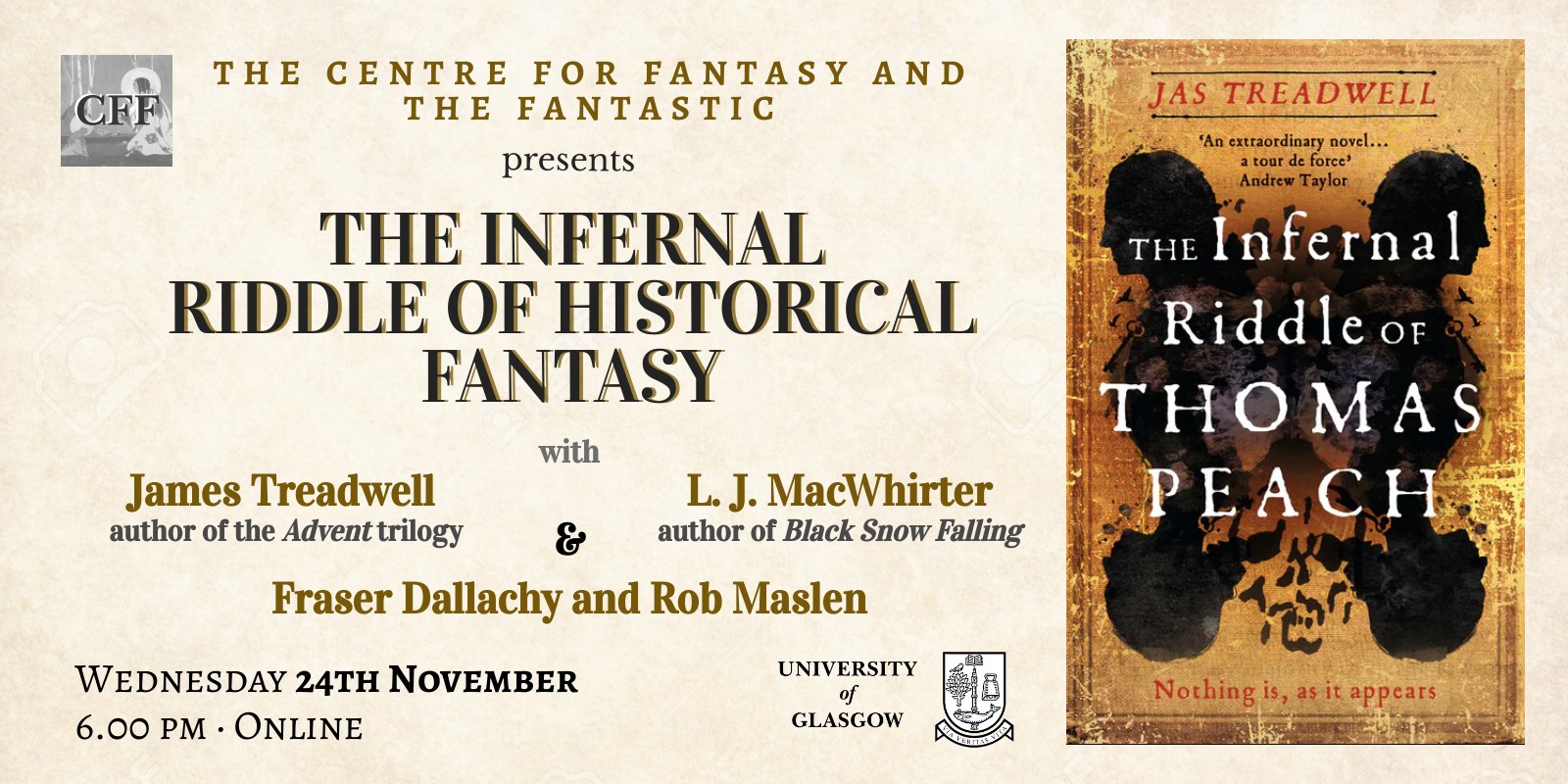 With James Treadwell (author of the Advent trilogy), L. J. MacWhirter (author of Black Snow Falling), Fraser Dallachy (Lecturer in historical linguistics), and Rob Maslen (Co-director of the Centre for Fantasy and the Fantastic at Glasgow).

Join us online as we celebrate the launch of James Treadwell’s most recent novel, The Infernal Riddle of Thomas Peach (Hodder and Stoughton, 2021), with a discussion of fantasy’s obsession with history. Each of our panelists shares this obsession. Treadwell’s novel is set in the late eighteenth century, MacWhirter’s in the time of the Tudors, while Dallachy and his colleagues have advised historical novelists by drawing on the vast resources of the Historical Thesaurus of English. Together they will consider some of the challenges faced by fantasists who choose to set their stories in the past. These may include:

We’ll also be responding to questions sent in by participants. Come along and be one of them!

James Treadwell is the author of the acclaimed Advent trilogy, about the calamitous return of magic to a world that has forgotten it. These are Advent (2012), Anarchy (2013) and Arcadia (2015), published by Hodder and Stoughton. Before that he was an academic, whose books include Interpreting Wagner (Yale University Press 2003) and Autobiographical Writing and British Literature 1783-1834 (Oxford University Press 2005).

L. J. MacWhirter is an award-winning copywriter and author. Black Snow Falling was published by Scotland Street Press (2018), introducing a new YA mythology in multiple timelines. The 2019 CILIP Carnegie Medal and the Edinburgh International Book Festival First Book Award were among its listings and nominations. Liz is currently writing her debut novel for adults, an historical novel with magical realism, in the context of a cross-disciplinary creative practice PhD.

Rob Maslen is co-Director of the Centre for Fantasy and the Fantastic at the University of Glasgow. He has published Elizabethan Fictions (Oxford University Press, 1997), Shakespeare and Comedy (Bloomsbury 2005), The Shakespeare Handbook (with Michael Schmidt, 2008), and editions of Sir Philip Sidney’s Apology for Poetry (Manchester University Press, 2002), Mervyn Peake’s Collected Poems (Carcanet 2008) and Peake’s Complete Nonsense (with G. Peter Winnington, Carcanet 2011). He blogs at The City of Lost Books (https://thecityoflostbooks.glasgow.ac.uk/).