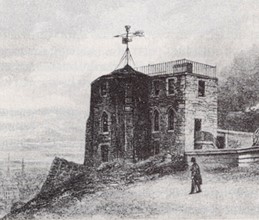 The term “astronomical observatory” usually brings to mind an image of a gleaming white or silver hemispherical dome, or a vision of the Hubble Space Telescope, hurtling around the earth at 30,000 km per hour at an altitude of more than 500 km above the surface of our planet. But in centuries past, the basic architecture of the astronomical observatory was far more utilitarian, merely constructed to raise the observer above the local landscape. For example, Cheomseongdae in South Korea is a 7th century ten-meter-high bottle-shaped tower made of granite blocks (Castro Tirado 3).

The Rundetårn (Round Tower) Observatory in Copenhagen was built by Danish king Christian IV in 1642, a helical internal ramp not only leading to an observation platform 40 meters above the ground, but reportedly offering amusement to Peter the Great as he frequently rode his horse up to the top (Castro Tirado 6; Cajori 372). Hans Christian Andersen included numerous references to the Round Tower in his writings, for example as a setting in the 1857 novel To Be or Not To Be (At være eller ikke være) (“Hans Christian Andersen”).

In H.G. Wells’ 1898 novel The War of the Worlds, the narrator recounts viewing Mars through a telescope in a “black and silent” fictional domed observatory in the English village of Ottershaw, describing the “shadowed lantern throwing a feeble glow upon the floor in the corner, the steady ticking of the clockwork of the telescope, the little slit in the roof” (Wells 11). George MacDonald’s 1864 short story “The Castle” includes an “observatory on a lofty tower,” part of the eponymous castle built on “the top of a high cliff” (n.p.). This latter architecture is echoed in David Lindsay’s 1920 novel A Voyage to Arcturus. The fictional “famous Starkness Observatory” where “Curious discoveries are made … from time to time” is said to be located on “the north-east coast of Scotland” (Lindsay 14). The characters Maskull and Nightspore arrived at the observatory after walking seven miles from the fictional Haillar Station, along a road “very wild and lonely, [that] ran for the greater part of the way near the edge of rather lofty cliffs, within sight of the North Sea” (Lindsay 17). The observatory complex, which looked as if it had been deserted for six months or more, is described as a “self-contained little community” and composed of “three buildings: a small, stone-built dwelling house [including a library], a low workshop, and, about two hundred yards farther north, a square tower of granite masonry, seventy feet in height” (Lindsay 17).

The eponymous departure for Arcturus is made from a platform on the top of the observatory tower. Lindsay’s choice of design is understandable, as it is certainly easier to launch a “torpedo of crystal” (Lindsay 27) from the flat roof of a tower than the narrow slit of a round dome. But the description of this abandoned Scottish observatory brings to mind the troubled history of real Scottish facilities, those in Edinburgh.  In 1768 optician Thomas Short (1711-1788) inherited a telescope made for the Danish King upon his telescope-maker brother James’ death. Thomas brought the instrument back to Edinburgh and after first setting it up on the roof of Heriot’s Hospital, petitioned the Town Council to lease him land on Calton Hill for the purpose of building an observatory that could be used by University of Edinburgh students (Brück, “The Story” 5). The stone structure was begun in 1776 but not completed until 1792, four years after Short’s death. While it is not built on the coast, and is composed of a single structure (unlike Starkness Observatory), it is made of stone, has a flat roof, and hugs a cliff-side.

Unfortunately, no funds had been set aside to purchase research-quality instruments, and the so-called Gothic Observatory languished. In 1811, nine years before the founding of the Royal Astronomical Society in London, a group of private citizens founded the Astronomical Institution of Edinburgh, and convinced the Town Council to lease them the Gothic Tower and adjoining land. The original structure (which became known as the Old Observatory) was slated to be used as a public observatory, while a true scientific observatory would be built nearby (Brück, “The Story” 7).

Famed Scottish engineer William Playfair’s unorthodox design for the new observatory was a “cruciform Roman Doric structure with six pillars in front of each of its strictly equal sides and with a prominent dome for a telescope at its centre” (Brück, “The Story” 8). While the observatory was begun in 1818 and not completed until 1825, a 1822 visit by King George IV led the facility to be “styled The Royal Observatory of King George the Fourth,” elevating it in name to a similar level as the Royal Observatory at Greenwich (Brück, “The Story” 10). Unfortunately the years were not kind to the new Royal Observatory, as financial support waned. The second Scottish Astronomer Royal, Charles Piazzi Smyth, announced his retirement in 1888, and a royal commission on the Scottish Universities issued a series of devastating recommendations, including abolishing the designations of Royal Observatory and Astronomer Royal for this facility (Brück, “Lord Crawford’s” 126).

All seemed lost for Edinburgh astronomy, but fate had other plans. James Ludovic Lindsay (1847-1913) twenty-sixth earl of Crawford and ninth earl of Balcarres, had long been trying to garner support for the Scottish Royal Observatory. A gifted amateur astronomer, in 1872 he moved to the mansion estate his grandfather had purchased in Dunecht, near Aberdeen, and built a world-class astronomical facility, including a 15-inch aperture refractor, in the U.K. second only to the Royal Greenwich Observatory. He was elected a Fellow of the Royal Society in 1878 and president of the Royal Astronomical Society in 1878 and 1879 (Gingerich 872).

Dunecht is certainly farther north than Edinburgh, but while it is on the coast it is not in sight of the North Sea. Lindsay’s observatory did include a number of separate buildings, including some with cylindrical domes and single-story structures housing solar instruments and a photographic laboratory (Brück, “Lord Crawford’s” 102). While there was also a library and a stone-built astronomer’s house, which had an observing platform on the roof, there was no separate stone tower (Brück, “Lord Crawford’s” 99).

Lindsay’s astronomical instruments were admittedly the envy of his colleagues, but his library was even more impressive. The so-called Crawford Collection is considered “one of the finest collections of astronomical books in the world, and especially rich in ancient and rare books, … altogether there may well be as many as 11,ooo books and pamphlets representing the individual contributions of well over 4,ooo authors in at least sixteen different languages” (Forbes 459). Upon the death of his father in 1880, the new Lord Crawford gave up his astronomical duties, leaving the day-to-day operation to his main assistant Ralph Copeland (1837-1905). When he later inherited his uncle’s title, he decided to sell Dunecht and move his observatory to Balcarres House in Southeast Fife, closer to the coast.

It was during this time (1888) that Piazzi Smyth resigned as astronomy professor at the University of Edinburgh and Scottish Astronomer Royal, leaving the future of Edinburgh astronomy hanging by a thread. Lindsay approached the government and offered all his astronomical equipment and his legendary library as “a gift to the nation, subject to the condition that the observatory should be rebuilt upon a suitable site and maintained in a proper manner” (“James Ludovic Lindsay” 272). The offer was accepted, and in 1889 Copeland was given the titles of Regius Professor of Practical Astronomy at the University of Edinburgh and Scottish Astronomer Royal (Brück, “Lord Crawford’s” 127). A committee was established to locate a more suitable site, away from the lights and smoke of the city, leading to the selection of Blackford Hill, a public park on the southern edge of Edinburgh. (Brück, “The Story” 53). As in the case of Starkness Observatory, there was no railway up to Blackford Hill, but a temporary track was built in 1892 branching from Blackford railway station in order to facilitate the movement of building supplies to the site (Brück, “The Story” 55). The main building is end capped by two revolving cylindrical domes “38 and 22 feet in diameter at the east and west ends of the building which were to cover the two principal telescopes of the observatory, the 15-inch refractor and a 24-inch reflector” (Brück, “The Story” 55). In between was a flat-roofed section housing the library and a platform for portable instruments. The facility was completed in 1895, far faster than the previous iterations of the Edinburgh observatories. With the Royal Observatory safely moved to Blackford Hill, the Calton Hill facilities became the property of the city council, and the Playfair facility was open to the public as the “City Observatory” for many decades.

While there is not a one-to-one correspondence between Lindsay’s description of Starkness Observatory and any one of the Edinburgh Observatories, there are tantalizing parallels to each. More importantly, having been born in 1876, David Lindsay could have witnessed the drama concerning the Royal Edinburgh Observatory in real time as a young man, having spent part of his youth in Jedburgh, Scotland (near the border with England) with father’s relatives (Ewing, “Biography”). While I have seen no evidence to suggest that David Lindsay was closely related to James Lindsay, the similarity in name may have attracted the author to the astronomer’s life story. It is also interesting that David’s older brother, Alexander (1869-1915) used the pseudonym Alexander Crawford to write serialized novels and short stories between 1911-15. As Murray Ewing notes, “the name Crawford has a long association with that of Lindsay, since a Sir David Lindsay (c.1360–1407) was made 1st Earl of Crawford in 1398” (Ewing, “Alexander ‘Crawford’ Lindsay”).

Today the observatories of Edinburgh have come back to life. While the COVID-19 pandemic has necessitated the closing of the Royal Observatory’s visitor’s center, scientific work continues at the UK Astronomy Technology Centre (UK ATC) and the University of Edinburgh’s Institute for Astronomy (IfA), both housed at the observatory. In 2018 the Collective Gallery took on responsibility for the Calton Hill complex, turning the City Observatory into a public celebration of contemporary art. In 2020 it was announced that the long-neglected Gothic Tower was being refurbished as apartments for visiting artists, special events, and vacations (Ferguson). This ultimate marriage of exploration, science, and the arts is certainly worthy of the heritage of Lindsay’s novel, and its Starkness Observatory. I wish them many successful voyages to ‘Art-cturus’ – and beyond.

Brück, Hermann A. (1983) The Story of Astronomy in Edinburgh. Edinburgh: Edinburgh University Press.

Forbes, Eric G. (1973) “Collections II: The Crawford Collection of Books and Manuscripts on the History of Astronomy, Mathematics, Etc., at the Royal Observatory, Edinburgh.” The British Journal for the History of Science 6(4): 459-61.

“Hans Christian Andersen and the Round Tower” (n.d.) Rundetaarn https://www.rundetaarn.dk/en/article/hans-christian-andersen-and-the-round-tower